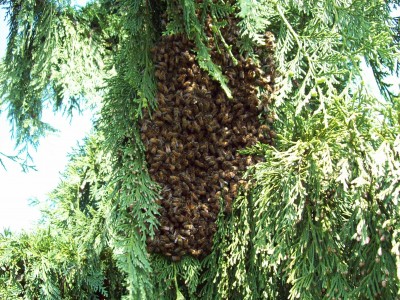 A swarm is the way a colony reproduces. The queen, along with a portion of the bees from the parent hive, set out on their own to find a new home. The remaining bees raise a new Queen.

A swarm of honey bees is an impressive sight to see. If you are fortunate enough to see one in flight, it will seem to appear out of nowhere as a small tornado or cloud of flying bees. If it decides to stop on your property, it will form a mass of bees, usually on a tree limb, but it could land on just about anything stationary. Don’t panic, swarming bees are very docile, since they have no home to protect. With that said, you should not attempt to handle the swarm yourself. Instead, you should contact a local beekeeper who has the right gear and expertise to remove it from your property. Also, unmanaged bee colonies, in the wild, find it hard to survive on their own due to various new parasites and diseases. By calling a beekeeper you will help the swarm survive.

The beekeeper may ask various questions which will help to apprise the situation.

How long has the swarm been there?

About how large is the swarm? (ie. size of a softball, basketball, beach ball)

What is the swarm attached to?

How far off the ground is the swarm?